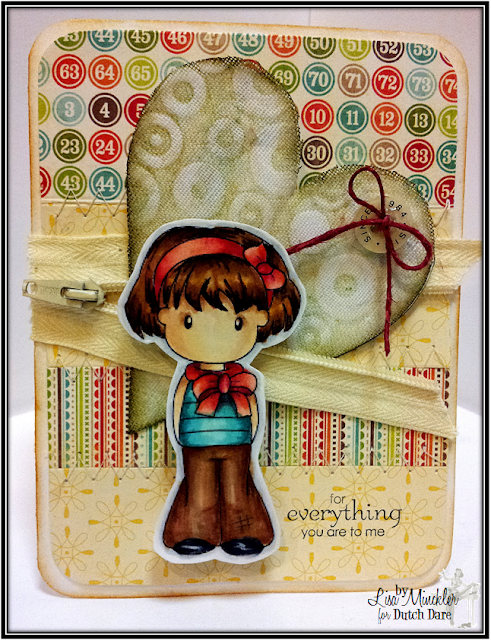 Give me a psychology book and tell me to read 5 chapters and I'll instantly lapse into a comatose nap, but tell me to hit the streets with a hands on interactive study and I'm gung-ho!  1989, sophomore year in college, coolest professor ever, sent his class out into the world to document human interaction.  Here's the catch, in his Kansas vernacular, "Ya ain't gonna look right!"  No truer words were ever spoken...well, sort of spoken?!  Fast forward to "Operation Nincompoop" day.
It's stupid o' clock in the morning as the class meets up at the local Donut Shop.  Professor is there waiting with a bear claw in one hand, coffee in the other and what should have been a red flag, grin on his face.  He proceeds to pass around a hat, each student taking out a little folded piece of paper.  As he walks in front of me, I reach out to grab in the hat, he pulls the hat away from me and the grin becomes even more menacing.  Guy standing right next to me grabs his assignment.  End of the line arrives, papers are all gone, students are studying their tasks, laughter and groans are starting to fill the air, and I ain't got crap!  As I stand there puzzled, watching as girls grab from the supplies on the table, bits of spinach, and awkwardly stick it on their teeth, guys unzipping their pants, girls unzipping their pants, several people swapping one shoe with each other, buttons being undone and then re- buttoned improperly, drops of water being poured down legs, and still...nothing. I think at this point I had the full on Valley Girl stance, arms crossed, leg out to the side, tapping foot with frustration when the professor walks over to me with a store bought foil pie plate and says, "Here's your prop." I immediately said, "Are you serious? You want me to wear a foil hat?  This is stupid. People DO get food stuck in their teeth, they DO forget to zip their pants, they CAN grab the wrong shoes, but people don't normally grab Reynold's Wrap and whip up a little beanie on their way out the door!"  That's when the professor very quietly, grabbed the pie pan from my hands, gently lifted the paper insert of the pan and then made direct eye contact as he began prying that sticky bit of goopy gunk used to stick the paper to the pan. THAT'S RIGHT...you got it...I got booger detail!
So what does this have to do with the challenge over at Dutch Dare?  Absolutely nothing!! HOWEVER, I've designed this card with someone special in mind, using the theme happening this week of Buttons and Bows with the precious image Kai from our sponsor Crafty Sentiments. 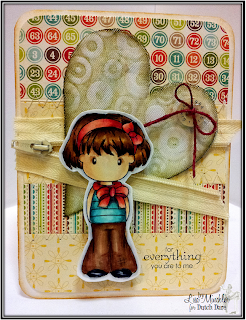 To make a long story longer, it's amazing the distance people will go to avoid you when you've got an obstruction dangling out your nostril!!  All except one special lady.  After hours of receiving occasional body language from strangers as they briefly looked at me, wiping their noses to indicate I might want to do the same, finally, one brave soul had the gumption to walk right up to me and say, "Honey, you got yourself a doozie of a snot rocket that appears to be held up on the launch pad!"
Needless to say, we've been thicker than thieves for over 20 years now and still going strong. Thanks to my crazy psychology professor, science inventing goopy gunk and the beautiful heart of a compassionate citizen, I've found a life long friend.  This card is for her and I figured the zipper would suffice and much prettier than snot rockets.  I've included a ginormous heart, just like hers, that I'm so privileged to know.
So please join us at Dutch Dare and make a card with buttons and bows for someone special in your life!!
Thanks so much for your visit. I hope you found some inspiration here or at least a good laugh at me.
Hugs n' Happy Stamping,
Lisa xx
﻿
Posted by Lisa Minckler

I so wish, if I could turn back time and redesign my life, I would choose you to go to school with. ..lol..or live next door to, or even be your pet chrissy and sleep in the basket by the back door, just to listen to all the frivolity going on around you..lol..that was sooo funny...
and you make awesome cards too, this is a real cutie, love Mia, so fun to colour..I love the big heart..and suspect your friend is not the only one with a big heart....

I'm with Chrissy lol... or wished i lived a bit nearer sow e could meet up for coffee and share stories lol..
Fab card .. i love those papers and Mia looks cute
Lisa x

Fabulous card Lisa but what a hoot of a story! Glad it had a happy ending!

Wow, way to make a nutzo story end up with the SWEETEST ending!! Only you, my friend. Only you....

Must be ALL FUN!!!. Why wouldn't I took psychology, again??. LOL. LOVE the story so much. And of course your zipper card is sooo adorable!. LOVE the heart. Your cards always make me smile :).

Bahahaha! What a wonderful story! And a beautiful card, as per usual.

What a fantastic story... and what a triumph for human generosity - one kind gesture and you both get a lifelong friendship out of it! The card is, of course, fantastic - zipper is such a great feature, and the texture on the heart is gorgeous! Thanks for another brilliant read too...
Alison x

I'm so impressed by your ability to put whatever it may be on your cards, and it always works out perfectly! The use of the zipper is such a creative idea, and together with the fabric heart you've created a great background for this sweet image! Great work, Lisa!

Lol I so needed a bit of a laugh. How funny your proff was to make you all do that and how wonderful that you found a very special life long friend out of it. Your card is adorable. Sandy :)

Hello Q
Well here I am back to commenting and what a doozie of a post I picked to return on!!!!!!
Fabulous read, I think your prof knew you very well.....
I have issues with images of little girls with no mouth but that is my problem to deal with. What I love about your card is how you have placed her so well and comfortably on your Bg that has the symbolic heart bursting out of the opened zipper, this is a unique and great idea, adding a little stitching completes the concept that it is attached and connected and not just placed for no particular reason other than an added element.
I love it.
Smiles:)
O

Fab card Lisa...such a novel way to use the zipper...I love it and I bet your friend will also
.fab story too ,your prof sounds like he has a great sense f humour
Have a great weekend
They x

ohhhhhh! ROCK ON! totally special card and great story! So, what happened after that? Did she prove your professor's theory that somebody would eventually say something? Or break his theory....

You got me cryin here Twang! This could ONLY happen to you. I can SOOOOO see that Professors evil grin as he set you up for that. What an awesome---gross, but awesome---LOL memory for you and how sweet that you got such a wonderful friendship from it. The card is a perfect representation of your relationships foundation. You rock girl! Hugs!

LOVE the zipper! Too cute! Have a great weekend, Melisa

Lisa what an amazing story! It certainly made me smile and to find that you are still friends after all this time and she loved you booger and all, well its just brilliant lol. I love your gorgeous card and I am sure your big hearted friend will love it too.

WOW!!! my friend that is one hack of a story, that professor is something else. I'd be right with your friend come to the rescue. Amazing card you made for her and I'm sure she will just love it, that is one big heart and the best sentiment. Love how you used the zipper as a symbol of friendship.
Hugs, Patricia

What a fabulous post - LOL! And a fantastic card, love the layers and that image is wonderful. TFS

Hah, I wonder why he chose you for booger detail!!! Hilarious story, wished I could have been there too.
The zip looks fabulous on this lovely card.
Hugs, Sandy

You really do need to write a book about your life!!
LOVE the fabric heart and the zipper on your wonderful card! The sweet little image is colored so beautifully too! How awesome that you are still friends and thinking of her with such a fabulous card!
What is it with college Psych professors? I always felt like I was being used as research fodder as well as educated with some of the crazy ideas our prof shared. Of course she also gave us bonus points on one particularly sunny fall day when the forum was nearly empty!

Now that is a wonderfully fun story! And bless your friend's heart for being so forthright and honest! Great card in tribute to her but I'm still look for the snot rocket on the card:)

Oh this is fab Lisa and I absolutely love the design with the zipper too. Would never in a million years have thought of that;) Love your story too and glad it did end good;) Hugs Bettina xx

First I looked at your card and then read your fine piece of writing. I think your card is wonderfully creative and your story hysterical. I keep telling you kid - you need to be a pro - oh the places you will go!!
Sandy