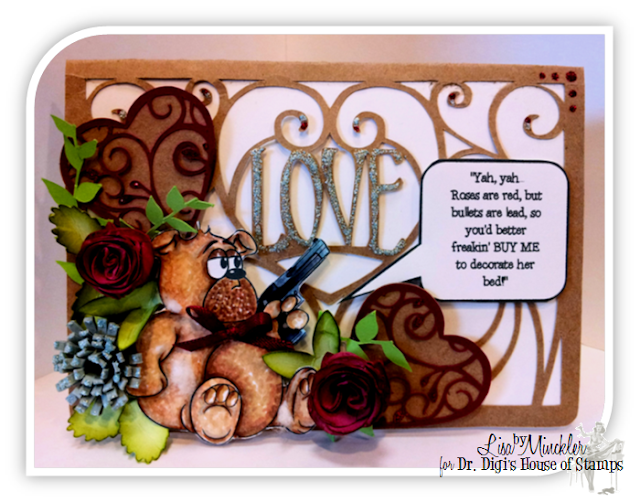 It's happening all around the world.  Valentine shops are reporting assaults one right after the other.  Billions of dollars are spent each year on Dung Beetle research, yet these poor overlooked, disgruntled and mutilated  stuffed animals are not being helped, they are finally fighting back.  It began harmlessly as small unattended children would grab a stuffed animal off the shelf and play with it while the parents shopped. Time and time again, being picked off the shelf, played with, and then returned; resulting in broken threads, dangling eyes, and stuffing oozing out.  Holiday after holiday passes and these poor misshapen, semi-fluffy, worn out animals are being rejected and neglected as Valentine gifts.
Sources close to me say that a revolution is brewing. Apparently it all started at a nearby Hallmark where an irate and  envious bear, who goes by the name, Enforcer Ted, has started a movement called, TR2AB, The Right 2 Arm Bears.  Government officials are closing in on the gun cartel that is providing these weapons, but until then, we can all do our part. 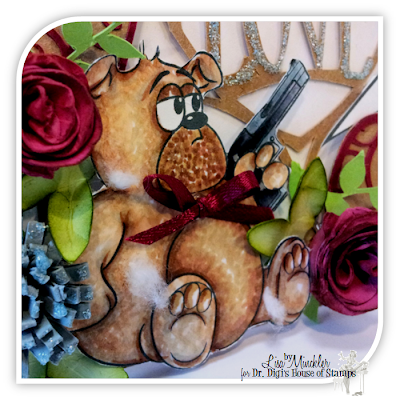 Thanks to Dr. Digi's House of Stamps and this very depicting representation, we can all share in the responsibility of being upstanding citizens and not only help the innocent victims who are being threatened to purchase said bears, but by being aware and sensitive to the needs of these poor unfortunate toys.
When you're out shopping for your loved one for Valentine's Day, don't just grab the chocolate and flowers, but find it in your heart to give these sad and disheveled critters a nice and loving home.  It's much more satisfying than a whelp on the forehead from a .45.

Hugs n' Happy Stamping and be safe out there!
(no humans or stuffed animals were harmed in the making of this post)
Lisa xx
Posted by Lisa Minckler

Now that is one TOUGH bear! LOL! Looks great, Lisa!! The images you come up with!! Woohoo!!

Absolutely brilliant. You never fail to make me laugh. What a fabulous sentiment. The whole thing is just marvellous.

What a fabulous card my dear friend^_^
Gorgeous details and beautiful image ^_^
Have a sweet afternoon^_^
Hugs,
Sonia

Lisa, you always amaze me with your art! At first it just looks like an adorable card, then you see the gun and sentiment and you gotta laugh! pure brilliance.

Okay,okay, I wont play with them anymore, I'll buy one..lol..fantastic card Lisa, brilliant colouring, love the flowers and hearts, a fabulous design too.

OMG Lisa........love this post and your card is fabulous. You are so funny I just love to read your stories. I collect really old teddies and I bet they could tell a tale or two..........they probably fight and argue at night as to their place on the bookcase !!!!!
Forget Top Dog......it's Top Cat or Top Ted in our house x

What a fun story Lisa. I love the little rhyme too! The stuffing coming out of the bear is a wonderful touch!

Oh my Lord do you ever crack me up!! Only you can make a gorgeous card and then I see the sweet Teddy carrying a gun. Only you I say -- well at lest I know that your are keeping up with the news!!!!! I would not miss you for the world!
Sandy

You are too, too funny! Always love reading your take on Dr. Digi's House of Stamps images! Fabulous card and beautifully embellished!

LOL Lisa - what a super post. Love the image and that sentiment, hee hee! TFS

don't make go find the cows with guns link...I will do it...and then you will have that song stuck in your head! I am pretty sure the teddy bears learned it from the cows, no?

He looks mean and very unhappy.. He is very adorable though, love the sentiment so clever.. The story made me chuckle.
Sandy :)

Teddies Rule OK! It's about time they stood up for freedom, justice and the Teddy way of life. Another super post, Lisa!

Oh that bear look so cute inbetween those hears and love all the swirls on this card Lisa. Thanks for all your lovely inspiration and lovely comments in my blog too. Have a great day. Hugs Bettina xx

Girl, you almost had a lawsuit on your hands cause I came within a frog's hair from falling off my chair and breaking some ribs from laughing. I won't even challenge you to top this one cause I know you can, but I'm afraid I'll really get hurt next time. ;-) The sentiment is so stinking funny and then you add all the filler info for the upcoming revolt. I'll definitely be on the lookout and I'm going right now to frisk the two that my hubby gave me that live on my chest of drawers. Wish me luck!

I love your sense of humour! I'm hoping that the stuffed bears in Canada don't catch wind of this movement. Fabulous card. The pretty flowers and romantic look provide such a fun contrast to the image. Love his fluff coming out. He is well loved...or maybe not :)

Your post is hilarious! Only you cold take a bear with a gun and make it so wonderful!

LOL, too funny! Great card and your sentiment is perfect. ;)

This its wicked i love it

Good grief! I knew it had been a while since I've been on here and visiting, but as I scrolled through your fabulous blog, I realized it's been almost a month!! YIKES!

I love your arming bears post and the sentiment on the card is too funny! Ted looks fantastic nestled in among the flowers and hearts too!